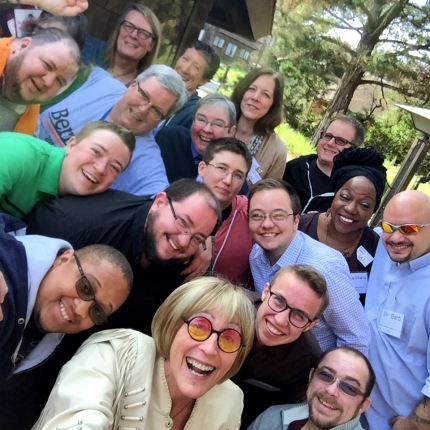 They were joined by trans elder, author, and activist Kate Bornstein, who facilitated the gathering, and, for a portion of the retreat, two staff members from the Unitarian Universalist Association’s headquarters: Dr. Janice Marie Johnson, Multicultural Ministries and Leadership Director, and Rev. Sarah Lammert, Director of Ministries and Faith Development.

Attendees were UU religious educators, ministers, and ministerial candidates. More than thirty people were invited to attend; those who declined either had scheduling conflicts or were not fully comfortable being publicly identified as trans at this time—a requirement given the public and historic nature of this first retreat.

The gathering was the result of more than a decade of organizing, dreaming, and visioning. TRUUsT (Transgender Religious professional UUs Together) was founded in 2004 by Mr. Barb Greve and Rev. Sean Parker Dennison to provide support for trans religious professionals within Unitarian Universalism. Since that founding it has been a dream and a goal to convene a retreat for UU trans religious professionals, and last week that dream finally became a reality. The convening was organized and planned by Barb and Sean with the financial support of a grant from the UU Funding Program and a matching grant from the Unitarian Universalist Association, as well as administrative support from Sarah’s office.

Highlights of the retreat included the gift of worship, on the first full day of the retreat, from Rev. Rosemary Bray McNatt and Rev. Sofia Betancourt. Rosemary and Sofia brought their blessings from the Finding Our Way Home community, the annual gathering of UU religious professionals of color. They spoke of the very first retreat of UU religious professionals of color more than ten years ago and drew a through-line between that historic event and this one.

Another highlight was the naming of truths, the telling of oral history, and the co-creation of a timeline of UU trans history over the decades, a timeline that will continue to grow and be shared with the world. The group honored the multi-generational nature of the gathering, with attendees spanning from Rev. Erinn Melby, an elder in the community and one of the first religious professionals to come out as trans in a Unitarian Universalist context, to three young adults who hadn’t yet been born in 1980 when that historic moment occurred. Attendees celebrated the leadership and the sacrifices of those present and not present who had carried the weight of being the first trans seminarians, ministers, and religious educators in the UU movement. Part of this celebration was a special honoring of Mr. Barb Greve and his 20 years of service as a leader, as Barb stepped down from the steering committee during the convening.

At the close of the gathering the attendees engaged in a conversation with the two representatives of the UUA administration about the needs of this community; in particular, the need to address the ways in which trans people are being harmed by the institution the two of them represent. The UUA administration was called on to create, in partnership with TRUUsT, structures to consistently and competently support trans people in the UU movement; to hold its staff accountable for doing no harm to trans people in general and trans religious professionals in particular; and to support a second TRUUsT retreat next year.

The altar created during the retreat, to which each attendee added an element. Photo by Mr. Barb Greve.

Not only was this gathering a historic occasion and the manifestation of years of organizing, it also marked a rebirth of TRUUsT as an organization. Where previously TRUUsT was primarily composed as a steering committee representing the needs of trans UU religious professionals, now it is fully an organization—or more accurately, a family—of trans UU religious professionals with a steering committee to provide leadership. To support this shift, Kate Bornstein offered to extend her services to TRUUsT for a full year in an advisory capacity.

The attendees of this gathering invite all transgender, genderqueer, gender fluid, two spirit, intersex, agender, bigender, third gender, neutrois, and other trans* UU religious professionals who are in good standing in their respective professional organizations (i.e., LREDA and UUMA) to become a part of TRUUsT. Please email Sean at minister@treeoflifeuu.org to get in touch and join our family! All others who would like updates from TRUUsT are invited to subscribe to our rebooted blog by using the sign-up box in the sidebar.

This is the administrative account for the TRUUsT website
View all posts by truustadmin →
This entry was posted in Developing TRUUsT, News & Press. Bookmark the permalink.