Rev. Dawn Fortune was called to the Unitarian Universalist Congregation of the South Jersey Shore in Galloway Township, New Jersey. Rev. Dawn currently serves as interim minister at both Emerson UU Chapel in the St. Louis area and the First Unitarian Church of Alton, Illinois. They graduated from Andover Newton Theological School in 2015 with a Master’s of Divinity and are in the process of earning a Graduate Certificate in Sexuality and Religion at Pacific School of Religion. Rev. Dawn was ordained into the UU ministry in 2015. 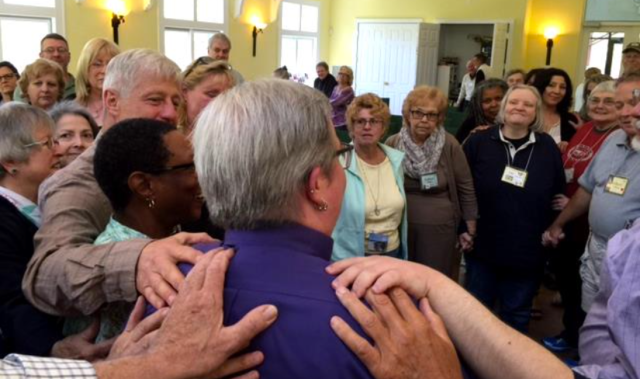 Unitarian Universalist Congregation of the South Jersey Shore members participate in a laying on of hands to welcome Rev. Dawn Fortune. Photo courtesy of UUCSJS.

“We were deeply impressed with Rev. Fortune during candidate week; their ideas, ease of communication, energy, compassion, and general presence,” shared Betsy Searight, chair of the search committee. “Our congregation is very excited about moving forward with Rev. Fortune as our minister.”

Dawn was particularly struck by the congregation’s willingness to stretch and grow when it came to calling a trans minister, saying: “I am delighted that the congregation invested time and energy into learning about gender before I arrived. During my candidating week, the people were just wonderful, working hard and being careful to use my correct pronouns (they/them). It truly made me feel welcome, so that when they called me as their minister it felt like coming home.”

The majority of the congregation’s membership attended a service and workshop on transgender inclusion led by Zr. Alex Kapitan in late April, before Dawn’s candidacy was even announced.

Rev. Dawn Fortune with members of the search committee. Photo courtesy of UUCSJS.

Rev. Otto O’Connor was called to First Parish in Malden, Massachusetts. Rev. Otto is currently finishing a term as ministerial intern at the UU Area Church–First Parish in Sherborn, Massachusetts. He graduated from Andover Newton Theological School in 2015 with a Master’s of Divinity and is in the process of completing a second Master’s of Arts in Global Interreligious Leadership. He achieved fellowship in the UU ministry in 2016 and was ordained only last month.

Stacey Gilchrist, president of the congregation, shared: “I am so thrilled, not just because Otto will be our next minister, but that we called him with excitement and optimism. He is the person to work beside us as we act to live out our faith’s highest values for ourselves, our community and our world.”

“I couldn’t be more excited, it feels like a fantastic match,” says Otto. “I look forward to helping this congregation grow its vision of love, compassion and justice in Malden and the wider community.” 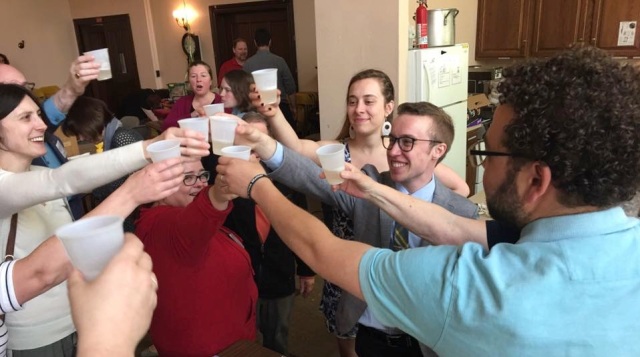 This is the first settled ministry for both Rev. Dawn and Rev. Otto and, in a momentous show of support, both were called unanimously by their respective congregations, without a single “no” vote from either congregation’s voting membership.

The leadership of TRUUsT is grateful to the many transgender UU ministers who have come before and forged a path for others to follow, often at great personal expense. Although the first openly trans ministers were ordained in the late 1980s, it wasn’t until 2002 that the first openly trans minister was called to a UU pulpit. Too many congregations over the years have considered themselves “not ready” for a trans minister despite the readiness of trans candidates to serve, and others have proven themselves unwilling to welcome the fullness of ministry that trans religious professionals bring. Given the number of ministers who are members of TRUUsT, there are too few in settled positions. We are mindful of the enormous sacrifice and struggle—past and ongoing—that has made it possible for Rev. Otto and Rev. Dawn to receive these enthusiastic calls this year.

Please join TRUUsT in celebrating Rev. Dawn Fortune and Rev. Otto O’Connor and wishing them long and fruitful ministries in their new congregations!