A Reflection on the 18th Transgender Day of Remembrance (#TDOR) 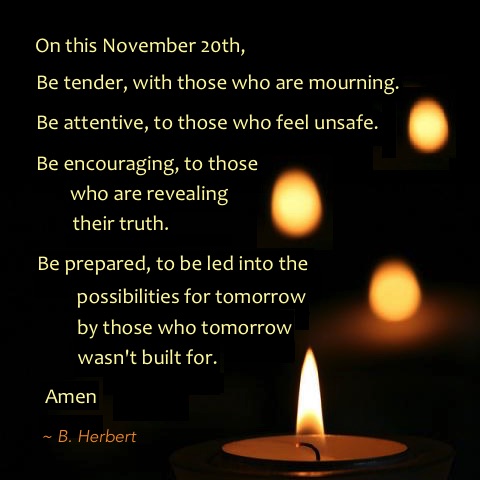 TDOR was started in San Francisco and Boston to memorialize the death of Rita Hester, whose murder has yet to be solved, along with most trans murder cases.

Every year, groups of trans and gender non-conforming individuals and their allies come together and light candles, say a prayer, and tell stories in honor of those we have lost that year. 2017 is on pace to have the highest reported deaths of trans and gender non-conforming individuals. As of November 10th, there are 25 reported deaths.

Let’s note that these are reported incidents, as some cases usually go unreported, or the victim is misgendered or deadnamed. Of those 25, 22 were persons of color.

As a trans person of color, November 20th is often faced with deep grief. It’s a day when we come together as a community, a family, and speak their names. Reminding those who bear witness that we saw each victim’s light, their humanity because they were not strangers to us.

My ritual every year is to pick a name, and learn as much of their story as possible, in hopes to keep their story alive.

This year, there was a victim of a police shooting not more than 50 miles from my house, Sean Hake. Sean was a 23-year-old bakery worker at Walmart. Sean had just scheduled a consult for a surgery they needed to take control over their body.

We honor our ancestors by keeping their stories alive within us. We also honor the ancestors by being resilient.

#TDOR is a day of remembrance and of resilience. A day to mourn the loss of our fellow trans and gender non-conforming siblings and a day to celebrate and uplift the resiliency of trans folx.

This same resiliency kickstarted the Stonewall Riot which was the catalyst for the LGBT rights movement. Marsha P. ‘Pay It No Mind’ Johnson and Sylvia Rivera were early stand-out leaders and were trans and gender non-conforming individuals of color.

On November 7th, 8 trans candidates were elected into public office. One of them replacing a anti-trans lawmaker.

This is what trans and gender non-conforming resiliency is and can be. It is carving out a way from no way. It is finding our voice and letting it ring out with all of our passion.

Trans folk are and forever will be leaders and movers in a world built to break us down.

As Unitarian Universalists, we strive to live our principles into action. Proper education of the gender spectrum must reach far beyond the bathroom, by learning how the intersections of white supremacy-based oppressions affect our fellow humans. We must learn how to eliminate oppression, by listening and learning from those who live at those intersections, especially trans women and femmes of color. Until then, every thing we do or will do, will be done in vain.

I pray for the day that TDOR will be a celebration of the lives that have moved onto Ancestors, not a mourning of the loss of beautiful souls taken by violence and hate. I pray that TDOR will be a day to celebrate and uplift the achievements of trans and gender non-conforming folx. Sadly, Nov 20th won’t be that day, but until that day comes I will honor the early ancestors by learning their stories and by telling my own authentic unapologetic truth.

Be tender, with those who are mourning.

Be attentive, to those who feel unsafe.

Be encouraging, to those who are revealing their truth.

Be prepared, to be led into the possibilities for tomorrow by those who tomorrow wasn’t built for.

Note: This piece is cross-posted from the Unitarian Universalist Association.

Like Loading...
This entry was posted in Prayers and tagged B. Herbert, Transgender Day of Remembrance. Bookmark the permalink.